Our tiny township is nestled between the Paparoa National Park and the Tasman Sea about halfway between Westport and Greymouth on Tai Poutini, Te Wai Pounamu, the western coast of the South Island. There are about 70 permanent residents who live in Punakaiki.

The Department of Conservation Paparoa Park Visitor Centre is at Dolomite Point directly opposite the entrance to the Pancake Rocks walkway. There is a sports gear store, cafe and parking nearby.

There’s a great range of accommodation in and around Punakaiki including self-contained holiday homes, a four-star hotel, cottages, hostels, glamping escapes and a campground.

Activities include walks ranging from a 10 minute stroll on the beach through to the Paparoa Track (New Zealand’s newest Great Walk), stand up paddle boarding, surfing and cave rafting.

This website is run by the Punakaiki Promotions Group an affiliation of many local businesses associated with tourism in various ways.

The Pancake Rocks and blowholes

The Pancake Rocks at Dolomite Point are limestone formations that began forming 30 million years ago when lime-rich fragments of dead marine creatures were deposited on the seabed. These were later overlaid by layers of soft mud and clay. Earthquakes raised them from the seabed to the level we see today.

Each ‘pancake’ consists of a layer of limestone layer made up of tiny shell fragments, separated from the next pancake by a thin layer of siltstone. Thousands of years of rain, wind and sea spray have etched the softer siltstone into nearly-horizontal grooves, and rounded the edges of the limestone layers, which together look like giant layers of pancakes.

Dolomite Point has a maze of underground passages and large open caverns which face the sea. When there’s a big swell, and the ocean surges into these caverns, water is forced into the passages. Looking for an escape route it follows the passages to the surface. As high tide approaches huge geysers of spray burst skywards. When there’s a big sea running the blowholes are spectacular.

The Punakaiki Marine Reserve surrounds the Pancake Rocks and blowholes and covers much of the coastline at the edge of the Paparoa National Park.

Punakaiki is located near the centre of the Coast Road, rated as one of the most spectacular coastal drives in the world. Take your time en route so you can stop and enjoy some of the walks and coastal views.

Punakaiki is also home to an array of bird and marine life. Depending on what time of year you visit look out for the following.

The tāiko (Westland petrel) is endemic to New Zealand, its only breeding ground is just south of Punakaiki. Rather than having nests tāiko are ground burrowing like mutton birds.

Unlike most birds they breed in winter. Their colony is empty during the summer when most of the birds migrate to western South America. At dusk in the winter months the birds can be seen flying into their colony.

Punakaiki holds an annual Tāiko Festival to welcome the birds back from overseas. In 2022 it’ll take place over 29- 30 April.

The wily weka is part of the rail family. The birds have reddish brown feathers blotched and streaked with black.

Weka are highly alert, inquisitive, and agile. They cannot fly but run very fast with necks outstretched. They are also excellent swimmers.

Weka eat fruits, grasses, seeds, insects, lizards, small birds, eggs of ground nesting birds and anything else they can get their beaks on.

Māori set snares or caught them with a slip noose at the end of a rod. They were then preserved in their own fat and stored for entertaining. Weka, however, learn quickly. As the saying goes: ‘Ka motu te weka i te mahanga e kore a muri e hokia’, When a weka breaks from a snare it won’t be back.

The New Zealand fur seal (kekeno) or southern fur seal, frequents the beaches and rugged Punakaiki coastline. They can be identified by their pointy noses and long pale whiskers. Fur seals have small visible ears, dark grey-brown fur on their backs and lighter fur underneath.

They can often be spotted sunning themselves during the day as they do their food hunting at night. You may see them as you walk along the coastline but their colouring camouflages them well among the rocks.

Fur seals may appear a little awkward when moving on land, but once underwater they’re graceful swimmers. Seal pups are particularly energetic, playing with other pups and objects such as seaweed and reef fish. 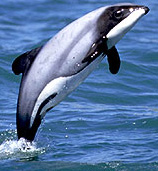 One of the smallest marine dolphins in the world, Hector’s dolphins grow no more than 1.5 m in length.

Only found in New Zealand’s waters, this distinctive grey dolphin with black and white markings and a round dorsal fin is the most easily recognised species of dolphin in New Zealand.